Product Description(Amazon.com)
On the verge of resigning from the D.C. police force, Detective Alex Cross knows he can't refuse this case. His partner John Sampson has a friend who has been framed for murder and is facing the gas chamber. His accusers? The United States Army. As a new woman in Cross's life brings him hope in the face of a devastating loss at home, Cross and Sampson go up against codes of honor and silence and three ruthless killers. But a bigger threat lies in wait: Their controller, a lethal genius who will introduce Cross to new depths of terror . . the last of the FOUR BLIND MICE.
Mass Market Paperback: 416 pages
Publisher: Grand Central Publishing (October 1, 2003)
Language: English
ISBN-10: 0446613266
ISBN-13: 978-0446613262

MY THOUGHTS:  This is book 8 of the Alex Cross series.  It is just as good as the first.  Keeps you glued to the book to find out what' s going on.  Alex and John have to find the people targeting soldiers.  They set the soldiers up for murder and the soldiers get the death penalty.   But the army is very secretive about this.  They don't want to share info with Alex.  So Alex calls on a friend at the FBI for help.  They finally track the assassins down, but who's behind these men for hire?    Alex has to find out.  I give this book 5....

This book is for 2 of my reading challenges....
52 Books in 52 Weeks
Fun in the Sun/Wacky Readers/Good Reads
Written by Sherrie at 2:19:00 PM No comments:

Product Description(Amazon.com)
Darkus Cuttle's dad mysteriously goes missing from his job as Director of Science at the Natural History Museum. Vanished without a trace! From a locked room! So Darkus moves in with his eccentric Uncle Max and next door to Humphrey and Pickering, two lunatic cousins with an enormous beetle infestation. Darkus soon discovers that the beetles are anything but ordinary. They're an amazing, intelligent, super species and they're in danger of being exterminated. It's up to Darkus and his friends to save the beetles. But they're up against an even more terrifying villain -- mad scientist of fashion, haute couture villainess Lucretia Cutter. Lucretia has an alarming interest in insects and dastardly plans for the bugs. She won't let anyone or anything stop her, including Darkus's dad, who she has locked up in her dungeons! The beetles and kids join forces to rescue Mr. Cuttle and thwart Lucretia.
Series: Beetle Boy
Hardcover: 288 pages
Publisher: Chicken House (February 23, 2016)
Language: English
ISBN-10: 054585346X
ISBN-13: 978-0545853460

MY THOUGHTS:  This is a really good book.  It is also the first of a trilogy.  Can't wait for the next book.  To find out what Darkus gets into.  Darkus finds a beetle, or does the beetle find Darkus?  This beetle is very smart and understands Darkus when he talks to him.  Darkus and his friends find a large beetle colony living in the neighbors house.  And all the beetles understand them.  Darkus and his friends are determined to save the beetles.  They come up with a plan to save the beetles.  And Darkus finds his father and has to rescue him from the woman who is going to exterminate the beetles.  Does Darkus free his dad?  Do the beetles get exterminated?  Read the book, it's really good.  I give this book 5....

This book is for 2 of my reading challenges.....
Monthly Keyword Challenge
52 Books in 52 Weeks
Written by Sherrie at 6:25:00 PM No comments:

I finally got my Gwennie Inspired quilt done.  For the month of August the theme was STARS.  I just used a border of stars. 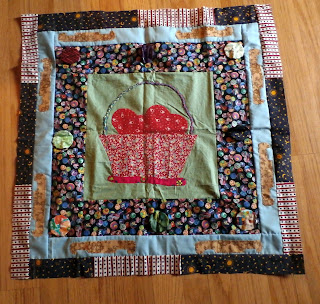 The theme for September is "Something Fishy".  I've got an idea, just have to figure out how to use it.  Hop over to Humble Quilts for a look at everyone's quilts.

I'm so far behind on everything....books, quilts, embroidery and the creative challenge I've been working on.   I didn't get my circles done for August, my Guinnie Inspired quilt didn't get done and my embroidery is sadly lacking and stitches.  My creative side has taken a vacation, can't seem to get the juices going again.  Haven't been reading much either.  I've been reading the same book for over a week, which is a long time for me.  So I'm hoping September will be a better productive month.  Hope everyone has a wonderful LABOR DAY weekend!