Product Description(Amazon)
Each one holds a piece of the puzzle: Lindsay Boxer is a homicide inspector in the San Francisco Police Department, Claire Washburn is a medical examiner, Jill Bernhardt is an assistant D.A., and Cindy Thomas just started working the crime desk of the San Francisco Chronicle.

But the usual procedures aren't bringing them any closer to stopping the killings. So these women form a Women's Murder Club to collaborate outside the box and pursue the case by sidestepping their bosses and giving each other a hand. The four women develop intense bonds as they pursue a killer whose crimes have stunned an entire city. Working together, they track down the most terrifying and unexpected killer they have ever encountered--before a shocking conclusion in which everything they knew turns out to be devastatingly wrong.
Series: Women's Murder Club (Book 1)
Hardcover: 432 pages
Publisher: Little, Brown and Company; 1st edition (March 5, 2001)
Language: English
ISBN-10: 0316666009
ISBN-13: 978-0316666008

MY THOUGHTS:  This is the first book of The Women's Murder Club.  I really enjoyed reading all the characters and I liked each one.  The plot of the story is a serial killer on loose.  He's killing bride and grooms on their honeymoons.  Lindsay Claire, Jill and Cindy decide to take a different way to solving the crime when the conventional way hits a dead end.   They each add something to the investigation and come up with a name.  But is this the right person, do they still have murderer on the loose?  I give this book 5.....

This book is for 2 of my reading challenges......
Library Love Challenge
Outdo Yourself Challenge
Written by Sherrie at 12:03:00 PM No comments:

I was over at Daffycat's place and came across a challenge.  It's a Piggy Bank Challenge, being hosted by Val over at Val's Quilting Studio. Isn't that a cool idea!  Most everyone saves change, as do I....I find coins laying around the house and I also get coins and bills in the laundry sometimes.  So thought I'd join up.


All's you have to do is create a post this week sharing your "piggy bank".
Include your goal of what you'd like to purchase with your savings come this time next year.
Include the linky button above to help spread the word to all your followers.
Return and link your post here anytime this week until August 1st.
Start "penny pinching". (Coins and bills are allowed)
Next year we'll  all empty our piggy banks on July 6th and create a post exclaiming our totals, share what quilty purchase we're going to make and link up here once again to celebrate! (Don't worry, I'll send emails to all who link up this week with reminders.)

My goals:
Buy Fabric
Embroidery Floss
Something Special for ME !

Now for my updates....
I have been doing the TAST(Take A Stitch Tuesday) over at Sharon's place, Pintangle.  I'm learning so many Embroidery Stitches and want to share them with everyone.  Today is Week 27, haven't got this one done yet, but have several I haven't posted about for awhile.  So here goes.....
WEEK 23
Wheatear Stitch 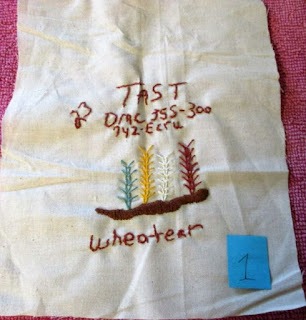 WEEK 24
Twisted Lattice Band
(Had some trouble with this one.  I think I invented a new stitch, lol) 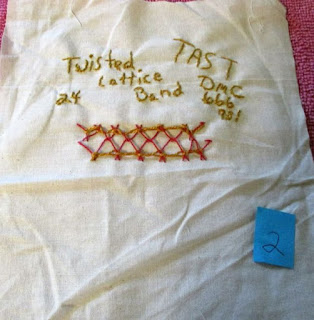 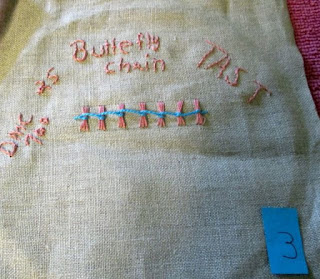 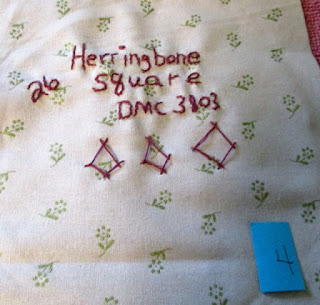 Well that's it for now.  I have a couple new projects I'm working on, I'll posting about those  in a few days.  Come back and take a look.......

When Jon Krakauer reached the summit of Mt. Everest in the early afternoon of May 10, 1996, he hadn't slept in fifty-seven hours and was reeling from the brain-altering effects of oxygen depletion. As he turned to begin his long, dangerous descent from 29,028 feet, twenty other climbers were still pushing doggedly toward the top.  No one had noticed that the sky had begun to fill with clouds. Six hours later and 3,000 feet lower, in 70-knot winds and blinding snow, Krakauer collapsed in his tent, freezing, hallucinating from exhaustion and hypoxia, but safe. The following morning, he learned that six of his fellow climbers hadn't made it back to their camp and were desperately struggling for their lives. When the storm finally passed, five of them would be dead, and the sixth so horribly frostbitten that his right hand would have to be amputated.

Into Thin Air is the definitive account of the deadliest season in the history of Everest by the acclaimed journalist and author of the bestseller Into the Wild. On assignment for Outside Magazine to report on the growing commercialization of the mountain, Krakauer, an accomplished climber, went to the Himalayas as a client of Rob Hall, the most respected high-altitude guide in the world.  A rangy, thirty-five-year-old New Zealander, Hall had summited Everest four times between 1990 and 1995 and had led thirty-nine climbers to the top. Ascending the mountain in close proximity to Hall's team was a guided expedition led by Scott Fischer, a forty-year-old American with legendary strength and drive who had climbed the peak without supplemental oxygen in 1994. But neither Hall nor Fischer survived the rogue storm that struck in May 1996.

Krakauer examines what it is about Everest that has compelled so many people -- including himself -- to throw caution to the wind, ignore the concerns of loved ones, and willingly subject themselves to such risk, hardship, and expense. Written with emotional clarity and supported by his unimpeachable reporting, Krakauer's eyewitness account of what happened on the roof of the world is a singular achievement.
Hardcover: 293 pages
Publisher: Villard Books; 1st edition (April 22, 1997)
Language: English
ISBN-10: 0679457526
ISBN-13: 978-0679457527

MY THOUGHTS:  I had heard about this on the internet and caught pieces of it on the T.V. news.  When I saw the book at the library, I picked it up.  I haven't seen the movie, but it is on my list of movies to see.  For now the book will do.  If the movie is anything like the book, it will be a good movie to watch.  The book gives all the details you don't get watching the news.  I can't say I understand the obsession behind climbing Everest, but this author gives you all that info plus more.  I give this book 5......

This book is for 4 of my reading challenges......
Alphabet Soup Challenge
Strolling Through Non-Fiction Challenge
Library Love Challenge
Outdo Yourself Challenge
Written by Sherrie at 12:46:00 PM No comments:

Product Description(Amazon)
When Halt and Crowley discover that the ambitious Morgarath has been infiltrating the Rangers in order to corrupt the Corps, the young Rangers travel north to find Prince Duncan, seeking a royal warrant to stop Morgarath before it is too late. By weakening the Rangers, the most powerful force in support of the King, Morgarath plans to steal the throne.

Yet when Halt and Crowley arrive in Gorlan, they discover just how close Morgarath’s scheme is to success. Morgarath has a plan to discredit the Prince and alienate him from his father. At the same time, the Baron of Gorlan has been conspiring to win the trust and admiration of the Council of Barons to further his plan. If the young Rangers are to prevent the coup from succeeding, they will have to tread a dangerous path, which leads them to a thrilling climax at the annual tournament at Gorlan, where a series of bitter duels must be fought and won.
Series: Ranger's Apprentice: The Early Years (Book 1)
Hardcover: 384 pages
Publisher: Philomel Books; First Edition edition (October 6, 2015)
Language: English
ISBN-10: 0399163611
ISBN-13: 978-0399163616

MY THOUGHTS: A friend recommended this book, so I thought I would read it and see what it's all about.  Not to my liking.  I'm not too fond of fantasy books.  But if you like those kids of books, this one is pretty good.  I give this book 3.....

This book is for 3 of my reading challenges......
Alphabet Soup Challenge
Library Love Challenge
Outdo Yourself Challenge
Written by Sherrie at 2:55:00 PM No comments:

Katheryn over at The Book Date is the host for Reading Month in Review.

Hop over and see what everyone has been reading.

My Reading for the Month of.... 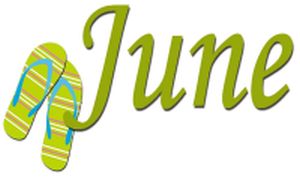