What do you see outside your back door?  I was watching a couple Fox Squirrels playing in the big Maple.  They were scampering up and down the tree.. 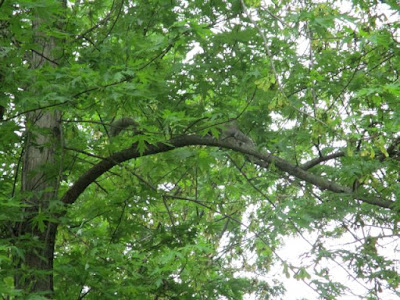 I know the pictures aren't very good, but just click on the picture and you'll see a larger version.  And then came along a Black Squirrel......we have 1 Black Squirrel that shows up once in a while. 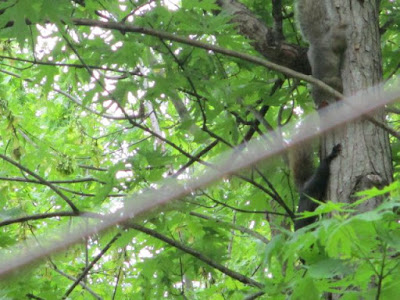 You can just see his tail and hind leg.  The brown squirrels don't get along with the black squirrels...they chased each other up and down the tree.  There are several black squirrels around our town, we have one.  What are you seeing in nature?

Black squirrels are a melanistic subgroup of squirrels with black coloration on their fur. The phenomenon occurs with several species of squirrels, although it is most frequent with the eastern gray squirrel (Sciurus carolinensis) and the fox squirrel (Sciurus niger). Black morphs of the eastern gray and fox squirrels are the result of a faulty pigment gene. Several theories have surfaced as to why the black morph occurs, with some suggesting that the black morph is a selective advantage for squirrels inhabiting the northern ranges of the species, with the black-fur providing a thermal advantage over its non-melanistic counterpart.
Black squirrels share the same natural range as their non-melanistic counterparts. However, black morphs of eastern gray squirrels are more common in the northern portion of its range around the Great Lakes Basin. They occur with the highest frequency in the Canadian province of Ontario, and the U.S. state of Michigan, forming the majority of the species population in those areas. In addition to their natural range, black morphs of eastern gray squirrels were also introduced into other areas of Canada, the United Kingdom, and the United States during the 19th and 20th centuries. Conversely, black morphs of fox squirrels typically occur with the highest frequency in the southeastern portions of the species' natural range.(Wikipedia)